Enoch (Henry Hopper) has lost his parents, hangs out with the ghost of a Japanese kamikaze pilot (Ryō Kase) and goes to funerals for people he doesn’t know. He meets Annabel (Mia Wasikowska), a young woman who also crashes funerals and who also has death playing a large part in her life. Despite knowing that circumstance will only allow them to spend a brief amount of time together, the pair enter into a relationship.

Throughout his career director Gus Van Sant has depicted the lives of young people, capturing the way they speak and relate to the world around them with an affectionate sincerity. His films are frequently about young men who are somewhat lost and removed from mainstream society, with death being a reoccurring theme that looms large. All these elements came together brilliantly in films such as Elephant (2003) and Paranoid Park (2007), and they are all present once again in Restless, however, this time something has not worked.

Based on a play by Jason Lew, the dialogue throughout Restless is twee to the extent that it borders on parody. The fusion of cutesy antics, banal teen-speak mixed with philosophical discussion (Charles Darwin is described as ‘the evolution guy’) and hip death-is-sad-but-also-cool attitude seems overtly calculated to appeal to what a marketing company might define as the hipster demographic. This is melodrama and sentiment dressed up as ironic nonchalance, complete with vintage fashion and geek-chic. Wasikowska delivers a respectable performance that attempts to stay true to the tone of the film without completely surrendering in its tedious indulgences. Hopper is less successful, although he does display occasional flashes of his late father Dennis Hopper, suggesting that there is an emerging talent within him yet to be fully realised. 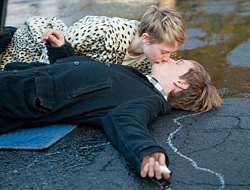 By signposting so early how it will end, Restless does suggest that it may handle its subject matter in a refreshingly unconventional manner or at least with a degree of restraint. That is why the film is most disappointing when it resorts to melodramatic outbursts that don’t feel like they belong in a film so self-consciously trying to distance itself from a run-of-the-mill weepy. To its credit Restless does eventually arrive at a moving and meaningful conclusion, but there are too many annoying moments that it passes through to get there.

Comparing Restless to Van Sant’s previous film Milk suggests that Van Sant is a director whose films are only as good as the scripts and actors he has to work with. That may seem like an obvious point, but worth making because so many aspects of Restless are impressive, just not enough to compensate for the flaws. For example, the cinematography by Harris Savides is astonishing. The film appears to have been mostly shot late in the afternoon in autumn, which gives it a gorgeous melancholic feel and visually evokes the themes of death and time running out. Visually and thematically the film frequently recalls Never Let Me Go although Restless is a far less satisfying film. Had Restless been a silent film it may have been some kind of stylish masterpiece, with its attractive stars symbolically posing through a number of scenes to represent love, mortality and embracing the moment.