Milk is a civil rights film about Harvey Milk, a prominent American gay rights activist in the 1970s who became the first openly gay man to be elected to public office in California. Harvey’s story of overcoming bigotry and prejudice to inspire others and effect change evokes the better-known stories of African American civil rights activists who fought different types of persecution. As a member of the gay and lesbian community Harvey faced particular challenges. Police brutality, fear of violence, death threats, suicide and anti-homosexual hysteria fuelled by the religious right were all aspects of Harvey’s life. Milk is also a fascinating examination of the political process and it is a lot of fun witnessing Harvey’s transformation from hedonistic hippy into a slick, media savvy orator.

Milk is the first mainstream film that director Gus Van Sant has made in 8 years. Recently his films have been existential and dreamlike examinations of alienated youth but with Milk Van Sant reminds us that he is also able to make crowd-pleasing films. Not that Milk is strictly a conventional film but it is far more broadly accessible than, for example, his previous film Paranoid Park. Nevertheless, Van Sant has a knack for completely taking the audience by surprise by how he positions his camera and how he edits a scene. One notable shot is of the reflection on a metal whistle that had been dropped by a victim of violence against homosexuals. Van Sant’s use of music is also completely unpredictable and he makes full use of the often-ironic score composed for the film by frequent Tim Burton collaborator Danny Elfman. But Van Sant’s unconventional use of film style is unobtrusive and it is there to better facilitate the telling of the story rather than drawing attention to itself. 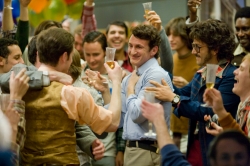 A major component of what makes Milk such a compelling film is the acting. On a purely technical level the combination of skilled casting and makeup has created an ensemble of actors who all bear an uncanny resemblance to the actual people that they play in the film. But it is how the actors perform, rather than how they look, that is what really counts and every single performance is compelling. Sean Penn is wonderful as Harvey, as is James Franco (Pineapple Express) as Scott, Harvey’s long-term partner and campaign manager. The chemistry between the two is extraordinary and they are a completely convincing onscreen couple.

There is certainly much in the film that is bewildering and will make you angry, especially in light of the recent reductive passing of Proposition 8 in California, but this is ultimately a celebratory story about inspiring people who achieved positive change. It is an important story that deserves the attention that it is getting but the bottom line is that it is also an entertaining and well-crafted film.