When director Wes Craven and screenwriter Kevin Williamson teamed up to make the original Scream film in 1996 they delivered something that audiences at the time hadn’t really seen too much of before. Self-referential films were nothing new but with Scream Craven and Williamson cleverly combined an awareness of slasher film conventions (including the often dubious clichés associated with the genre) with a genuine affection for scary films. The result was a classic post-modern film that worked successfully as both a tribute and a parody of 1970s and 1980s teen-slasher films. It was frightening like a horror film should be while also being a lot of fun.

The strength of the resulting series (in particular the second film) was then about how well each film responded to trends in horror cinema and the characteristics of individual films within a franchise. The self-referential nature of the series was explored through the concept of the Stab films – the horror franchise watched by the characters within the actual Scream horror franchise. In Scream 4 the extent of intertexuality within the horror genre is so pronounced that even the Stab films have become blatantly self-referential so that the films within the films are now commenting on themselves as constructs. Scream 4 doesn’t knowingly wink at the audience, it holds up a neon sign declaring itself to be very clever. And yet, it mostly works.

Part four is most effective when exploring the idea that as a film set and made a decade later, about a Ghostface copycat killer on the loose, is effectively a remake or reboot in an era when so many Hollywood horror films are remakes and reboots. While original cast members Neve Campbell, David Arquette and Courteney Cox are all back to reprise their roles, most of the rest of the main cast are emerging actors. The generational gap is expressed through commentary on the way that today’s teenagers and twentysomethings have grown up with remakes and self-aware horror films (of course ironically resulting from Scream) that are very different to the ‘old school’ films that the original characters grew up on.

Scream 4 is less nuanced in the way it reflects other trends in horror. We’re told that a reboot film this far in the franchise should contain more gruesome and elaborate torture-porn style killings but apart from a single gory shot of one of the victims, we never get a sense of that. Despite the surveillance/found footage trend of presenting deaths as supposedly being caught on amateur camera – either by accident or filmed Peeping Tom style by the voyeuristic killer – this theme only gets paid lip service. The scene where one character laboriously explains how the murders were filmed and why feels part undergraduate academic deconstruction essay and part ‘now that you are about to die let me tell you all my plans’ plot device. 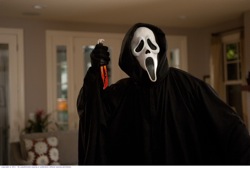 While the enjoyably smart-ass self-aware nature of the Scream films isn’t consistently successful in this new instalment, it does what the original films did so well and that is to take the audience on a fun ride with a decent blend of scares and laughs. The whole cast are very likeable and Craven and Williamson know how to maintain the right tone so that the film remains bloody and violent enough without ever getting nasty. The scares are more wickedly fun vicarious thrills than truly terrifying and the comedy doesn’t always work but that’s the nature of the Scream films. Highly enjoyable with no great revelations, surprises or significant inventiveness, Scream 4 is still a fun and welcome visit from an old friend.