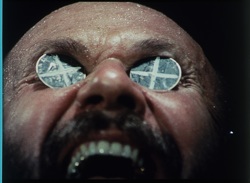 While watching the start of Wake in Fright you could be forgiven for thinking you were watching a Sergio Leone film. The music and opening 360 degree shot of the small cluster of buildings in the middle of the barren and empty Australian desert echoes the slow dramatic cinematography of a Leone Western. But instead what you are watching is the beautifully restored print of 1971 Australian classic Wake in Fright, which until recently has been next to impossible to see. Based on the 1961 novel by Kenneth Cook, Wake in Fright is a confronting and often brutal depiction of Australian culture and life in the outback. Directed by Canadian director Ted Kotcheff, whose later films include First Blood (1982), Wake in Fright is about John Grant, a young teacher who yearns to be freed from the outback posting that he had to take to repay his study grant. While passing through the town Bundanyabba (known as “The Yabba” to the locals) on his way to Sydney for his holidays, John gambles away all his money and becomes trapped in the hellish world of ritualistic drinking, kangaroo shooting and aggressive mateship. John soon finds himself on a rapid spiral downwards into perversity and depravity.

In one of his few film acting roles, the English stage and TV actor Gary Bond portrays John Grant as the type of city snob who you would expect to find the Australian outback the most repulsive. However, as dislikeable as John is, it is not difficult to share his contempt for the locals who are depicted as alcohol obsessed, suspicious, crass, unhelpful and almost primitive. When John first enters the pub in The Yabba the camera emphasises the rows upon rows of beers being rapidly consumed by sweaty men, some of who are half naked. Nevertheless, there is something about the overtly male world of Australian mateship that John finds seductive and each time he partakes in the various beer fuelled activities, his debasement progresses to a new level. The most vivid and shocking scene in Wake in Fright is when John gleefully goes along on a kangaroo hunt. The sequence, which contains footage from an actual hunt, is brutal and horrific and yet like the helicopter attack scene in Apocalypse Now, it is also disturbingly exhilarating right up until it reaches its nightmarish conclusion.

Wake in Fright is a remarkable film and a true Australian classic. If nothing else, it is of note for containing Chips Rafferty’s final film appearance and Jack Thompson’s first. It also features an incredible performance by Donald Pleasence, as an alcoholic doctor who presents John with a warped and twisted reflection of the person he may become if he gives in to the primal desires stirring within him. However, one of the most remarkable things about Wake in Fright is how little it has aged. It still functions as a savage condemnation on the prevalent obsession Australians have with drinking, the seductive destructiveness of gambling and, what John describes as, “The arrogance of the stupid who expect you to be as stupid as them”.