One of the many joys of cinema is its ability to offer audiences a glimpse into a culture that they otherwise may never experience first hand.  The lifestyle of a nomadic sheep shepherd family on the vast barren steppe in southern Kazakhstan is not something that many audiences, even from other parts of Kazakhstan, would have much insight into. Set in the middle of nowhere on the Kazakh steppe, where the nearest city is 500 kilometres away, Asa (Askhat Kuchencherekov) has recently completed his naval service and is now living with his sister’s nomadic shepherd family in order to become a shepherd himself. But in order to get his own flock and therefore independence, Asa must marry. Unfortunately the only eligible girl living anywhere near his sister’s family is the never-seen Tulpan, who dislikes Asa’s ears and would prefer to go to college in the city rather than become a shepherd’s wife.

Writer/director Sergey Dvortsevoy gives Tulpan a gentle naturalism that never feels pretentious or laboured. The combination of long shots and scenes depicting everyday domestic life, which don’t necessary contain anything of narrative importance, makes the film truly observational. Young children and various animals roam freely to interact with the main characters, and accidents and natural occurrences remain in the film to give it a sense of immediacy. The constantly moving camera is often very strategic about when it reveals certain elements, giving Tulpan an overall sensation of planned spontaneity. The most remarkable scene depicts an actual lamb birthing, shot by Dvortsevoy’s crew who were kept on constant standby in order to start filming exactly when they needed to. Another highlight is the very funny scene involving an angry camel. 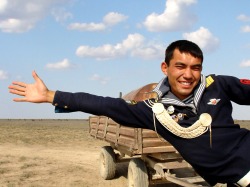 Watching Tulpan is not an earth shattering experience but its ethnographic detail and beautiful cinematography are enough to sustain interest from audiences looking for something outside of their comfort zone. Asa’s quest to gain Tulpan’s love, his conflict with his brother-in-law and the general difficulties facing the family are really secondary elements in this film, which is primarily about capturing moments that represent the nomadic lifestyle.