I first saw Dogs in Space (written and directed by Richard Lowenstein) when I was in my twenties, some time in the late 1990s, about a decade after the film was released in 1986. It was a revelation. I’d never seen a film that felt so distinctively Melbourne in a way that I could recognise. Also, up until that point, I’d never seen an Australian film that felt so influenced by New Wave European cinema in its almost anarchic abandonment of traditional narrative structure. I had seen plenty of ‘worthy’ Australian art-house films (which I also love and cherish) but not something this playful and rebellious. It was instant love. I remember on at least two occasions introducing friends to Dogs in Space, and their response was always one of anger: ‘Why the hell haven’t you shown this to me before?’ they demanded.

And yet, Dogs in Space  is about Melbourne in 1979, when I’d only been alive for a few years. I’m not at all qualified to comment on the authenticity of what takes place in the film. It feels slightly exaggerated, but the testimonies in the 2009 documentary We’re Livin’ on Dog Food suggest that it’s not. What I did identify with was a spirit; the legacy of which I was experiencing at the time, living in share houses in Melbourne’s inner suburbs. Like the Dogs in Space characters, I was a middle-class kid from the suburbs who was somewhat ‘slumming’ it – too old to live at home and too young to commit to anything that felt like a real job. And that’s what the film captures – the desire of youths to deconstruct themselves from mainstream society and rebuild themselves into something ‘real’, regardless of their background. Dogs in Space makes a point of reminding the audience that punk in Australia was a cultural movement embraced predominantly by the middle-class, but that didn’t make it any less charged or meaningful.

The film begins by defining how it situates itself within Australian culture. After brief 1957 archival footage of early Soviet space launches, which includes sending Laika the dog into orbit, Dogs in Space opens with a menacing shot of a beat-up car idling in the night. One of its very rough-looking occupants sticks his head out of the window and, in the most nasally Australian twang, snarls to an unseen passer-by, ‘Hey! Dog-face! Show us your snatch!’ The scene looks like it belongs to any number of Ozploitation films of the era, combining a Mad Max aesthetic with distinctly bogan pub rock culture. 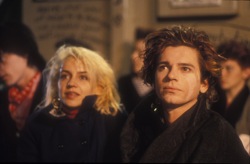 It’s a very specific image of Australian identity and one that is introduced at the start of Dogs in Space so it can be quickly shot down in flames. There are other faces to Australian culture and until then, and mostly since, those faces are not given much attention. These alternate faces are of course the punks of late 1970s Melbourne who are introduced in the film, camping outside a David Bowie concert. The car-load of obnoxious bogans screeches up to torment them, but are quickly dispensed with and sent on their way. This film is not for them, or those who identify with them. Instead it’s for a subculture that briefly thrived in inner-city student share houses and venues around Australia, whose legacy introduced and developed some of Australia’s most celebrated music.

The film’s title sequence then concludes with a slow approach shot of the film’s main setting: a run down house in Richmond filled with various occupants who are either living there legitimately, squatting, or simply hanging out. Over the top of the soundtrack different pieces of media float by: the opening titles of Countdown, a station identification for iconic Melbourne radio station Triple R and Molly Meldrum talking about the Bowie gig. The various characters who filter through the house are an assortment of musicians, political activists and folks just wanting to have a good time. They have sex, listen to music, take drugs and throw parties. One of them is even trying to study for his engineering exams.

The almost complete absence of a narrative allows the film to simply indulge in scene after scene of chaotic activity. Some characters we get to know, some are just fleeting fragments. Orchestrated long shots convey the energy and excitement of gigs and parties. Strands of music performances and conversations flow in and out of the film to make it a series of impressionist fragments that, once combined, make some sort of brilliant sense. 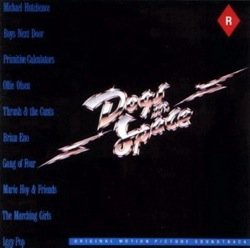 The soundtrack, produced by Ollie Olsen, is one of my favourite film soundtracks from Australia or anywhere else in the world for that matter. It includes songs by Iggy Pop, Gang of Four and Brian Eno plus an assortment of songs from Melbourne’s ‘little band scene’. Many of the songs are played in the film by the original performers, including Marie Hoy (who delivers one of the greatest covers of Rowland S. Howard’s ‘Shivers’), Primitive Calculators and Thrush and the Cunts. Then there are the songs sung by Michael Hutchence, lead singer of pop group INXS and the film’s star. Hutchence’s character in the film is based on Sam Sejavka from The Ears, so appropriately Hutchence performs a couple of Ears covers, including the titular ‘Dogs In Space’. However, the stand-out for me is ‘Rooms For The Memory’ as it’s a brilliant fusion of post-punk and pop, linking the period the film is set in to the period the film was made in, and making it a catchy and eventually devastating song to finish the film with.

And what about Hutchence, in what would sadly be one of his few acting roles? As the hedonistic, wild, self indulgent, magnetic and handsome Sam, he’s a bizarre Aussie Jim Morrison: reptilian, lecherous, pretentious and extraordinary. He is instantly recognisable as a creative genius who, through self-indulgence, is screwing up his life and the lives of those around him. You start off thinking Sam’s a bit of a prat and then get seduced by his carefree confidence and charismatic recklessness. This is all turned on its head in one of my favourite scenes when his mother shows up to do his laundry and bring him a hot dinner. Not only is his persona demythologised, but you also see the true extent of his selfishness and lazy sense of entitlement. And yet he is so confident, so carefree and so likeable, making him a wonderfully chaotic antihero to structure a chaotic anti-film around.

Then there is Saskia Post as Anna, Sam’s beautiful and tragic girlfriend who knows he is leeching off her, but can’t help being drawn back to him. Post provides the heart of the film, looking after the more vulnerable drifters who come through the house and being patient and tolerant of Sam, way beyond the call of duty. She radiates every time she is on screen with her combination of punk attitude and classical Hollywood beauty. The rest of the supporting cast are too extensive to mention and I latch onto somebody new on every viewing. However, I have a particular soft spot for Tim (Nique Needles) who looks so sad while pretending he was going to quit the band that have just kicked him out. I also love Chris Haywood’s cameo as the uncle with the chainsaw, and poor old Luchio (Tony Helou) who is trying to study for his exams amid the parties, band rehearsals, noisy sex and general mayhem – I once had a Luchio year.

Dogs in Space is one of the very few Australian films that reflects an Australian identity that I can relate to, even though it depicts a period and scene that I never knew. It’s affectionate and critical of Australia’s middle class punks; celebrating the scene while also providing a mournful coda for how it would all come to an end. Energetic, youthful, frequently hilarious and ultimately so sad, Dogs in Space is an Australian counter-culture classic to which I continually return, and introduce to new like-minded friends – who are inevitably annoyed that I haven’t shown it to them sooner.