From the mid 1970s to the mid 1990s, the West Indies dominated Test Cricket with an undefeated streak that lasted longer than that of any other professional sporting team. This UK documentary charts the progression of the team throughout the 1970s from an almost novelty group of players, who were condescendingly regarded as ‘Calypso Cricketers’, to the disciplined, athletic and fearsome team that would come to dominate the sport. An energetic blend of archival footage, music and contemporary talking head interviews explores the development of the team and their immense political relevance to the Caribbean people whose recent struggles for independence mirrored civil rights movements in the USA and later South Africa.

Like the recent Formula One documentary Senna and the 1996 boxing documentary When We Were Kings, Fire in Babylon explores the politics in and away from the game. At one point the West Indies star batsman Viv Richards is even compared to the subject of When We Were Kings Muhammad Ali, due to Richards’s decision to turn down an extremely large sum of money to play in Apartheid South Africa. Tracing the origins of cricket within the Caribbean nations as something introduced by the English aristocracy as a symbol of colonialist rule, the film demonstrates why it was so significant for the West Indies team to master the sport. By beating the English cricket team, the descendants of former slaves were beating the descendants of the former colonialists at their own game.

While the English cricket team feature in Fire in Babylon as a primary antagonist, especially Tony Greig who in 1976 insensitively stated he wanted to make the West Indians ‘grovel’, the Australian team are also presented as a major foe. In particular, the fast bowlers Jeff Thomson and Dennis Lillee are depicted in the stock footage and photos to appear almost animalistic with the aggressive bowling techniques that they introduced to the game. The fact that the West Indies bowlers were later widely criticised for adopting similar techniques, which significantly contributed to their early and ongoing wins, is a double-standard that the film doesn’t let slip by. 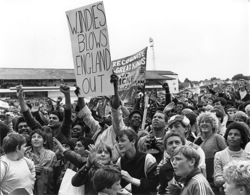 The large collection of interviews assembled for this film create a wonderfully cohesive impression of the team as a fully function single unit that still comprised of individual players. Specific players do get mentioned, but overall the film paints a picture of the team as a single character, which is important considering how they collectively began representing African independence both within the Caribbean and within various communities living in England during a time of racial tensions. At first glance, the amount of screen time given to musical performances and interviews with musicians seems odd, but it establishes the cultural effect the team had and how what the team stood for was articulated through popular art forms such as music. Bob Marley and the team were reportedly mutual fans of each other and former Wailers band member Bunny Wailer features extensively in the interviews.

At the very least, Fire in Babylon is a great film because is so effectively conveys a love for the game that even complete non-cricket fans should find enticing. The West Indies team do begin the film as the classic underdogs so watching them overcome early adversity and humiliations is compelling and satisfying. The excitement of the games is frequently conveyed by rapidly crosscutting between game footage and the various interviewees enthusiastically recounting what happened. Their energy is infectious and is what makes the blend of sport, music and politics in Fire in Babylon that extra little bit special. Like all great documentaries, Fire in Babylon transcends its immediate subject matter to be a film with universal appeal.