Gone with the Pope is an Italian-American gangster exploitation film about an attempt to kidnap the pope. Inspired by The Godfather and originally shot in 1976 it then remained unfinished until 2009 after the work cut print was discovered, restored, edited and now released. While the film was originally make as a fun gangster film (it was after all originally titled Kiss The Ring), contemporary audiences are going to enjoy it for its shortcomings as well as its strengths.

The film’s director, writer and actor is Duke Mitchell, an Italian-American crooner and entertainer whose claims to fame include starring in Bela Lugosi Meets a Brooklyn Gorilla and being unsuccessfully sued for being one half of a 1950s nightclub act that was uncannily similar to Dean Martin and Jerry Lewis’s famous routine. As the lead character Paul, Mitchell is pretty terrible but there is something undeniably captivating about him. At least he does more than monotonously read off cue cards being held up off screen, although many of the unintentional laughs that come from watching this film are because so many of the supporting cast resort to doing this.

The person largely responsible for Gone with the Pope now seeing the light of day is Bob Murawski, who is Sam Raimi’s regular editor (most recently working together on the Spider-Man trilogy and Drag Me to Hell) and Academy Award winner for co-editing The Hurt Locker. Murawski has done a good job piecing Mitchell’s films together and honouring the spirit of the original filmmakers despite not having a script to work from. The film is still all over the place but that is part of its charm.

Despite the tendency to knowingly laugh at the hammy dialogue, abysmal acting and ludicrous plot, there are some genuinely impressive elements to Gone with the Pope. The cinematography contains some inspired lighting and some curious plays on perspective with the use of wide-angle lenses. When the crew aren’t filming what is supposed to be the inside of the Vatican but appears to be the back of a restaurant, they get some tremendous exterior footage of Los Angeles, Las Vegas and Rome in the 1970s. Amid all the banal and terrible dialogue Paul even gets to deliver an extremely powerful, provocative and mostly thoughtful speech about the hypocrisy of Catholicism. 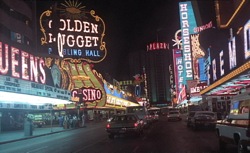 On the flip side there is a jaw-dropping scene full of casual racial insults directed at an African-American prostitute and a cruel sequence, which is played for laughs, where an overweight woman is pressured into getting into bed with one of Paul’s gang members. So how can we evaluate Gone with the Pope’s worthiness as a film? It is clearly inept and offensive in so many ways but there is no denying the enjoyment to be gained from watching it with a vocal audience. It functions as a weird time capsule and it does possess an independent spirit that is admirable at times while horribly misguided at others.

This review has been revised since it was first posted. Please see my comment for an explanation why.