The winner of the Best Foreign Language Film at the 2010 Academy Awards is the Argentinean film The Secret in Their Eyes about the thin lines between passion and obsession, love and fear. Set in Buenos Aires the film alternates between two time periods to portray a 1974 murder/rape investigation led by state court criminal investigator Benjamin Espósito and Espósito’s attempt to write a novel about the investigation 25 years later.

The film opens with Espósito attempting to begin his novel. One attempt focuses on the love between the murder victim and her husband, another attempt depicts the brutal crime. This sets up the conflict between love and fear that will be explored throughout the film, with a reoccurring gag about a broken typewriter missing the letter “A” revealing just how slight the difference can be.

While working within the familiar generic conventions of a mystery/thriller, The Secret in Their Eyes is also a very effective love story, political parable and examination of how memory works. The highly acclaimed Argentinean actor Ricardo Darín (Nine Queens, The Dancer and the Thief) portrays Espósito beautifully as a man who is inspired by the love of the victim’s husband to pursue the brutal case he has been handed but at the same time cannot act on his own feelings for his former colleague and now boss.

In the background to the investigation is the growing political turmoil that plagued Argentina during much of the 1970s, culminating in a military coup. The politically endorsed violence and the perversion of justice that was occurring on a national level is reflected in the outcomes of the film’s 1974 passages. Likewise, the scenes set in 1999 use the characters to examine notions of how a country remembers its past and, rightly or wrongly, what it does to try to heal itself. While an awareness of Argentinean history is by no means necessary for appreciating The Secret in Their Eyes, it nevertheless adds an extra layer of meaning to its exploration of truth and justice. 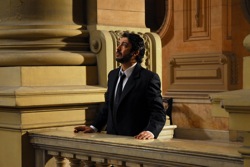 The Secret in Their Eyes uses genre to explore the politics of its country without sacrificing the delivery of an extremely engaging story. The editing prevents any confusion between the different time periods, except when we are meant to question what is an unreliable memory, imagined event or false testimonies.

Finally, if The Secret in Their Eyes was not rewarding enough already, it features a breathtaking long shot that begins seemingly from a helicopter above a football stadium and then flies in to follow a chase sequence through the passages underneath the stadium. Regardless of whether or not this is a faked long shot (it does seem impossible); it is an exhilarating technical achievement that serves as the centrepiece of an already extraordinary film.