The opening gag of a teenage boy jumping off a building while dressed as a superhero, to then plunge to his death, wonderfully sets up the very nasty yet very funny tone that runs throughout Kick-Ass. Similar to Watchmen, Kick-Ass explores the idea of what would happen if everyday people adopted costumed superhero personae. However, while Watchmen is set in an alternative past where superhero comics never existed and the costumed heroes have actual experience and skills, Kick-Ass is set in the present day and initially focuses on the rather pathetic plight of teenage comic book fan Dave Lizewski (Aaron Johnson who was John Lennon in Nowhere Boy). Dave initially discovers that calling himself Kick-Ass, getting a silly looking costume and doing a few days of training are not going to stop him getting very badly hurt when he takes on the bad guys.

Kick-Ass is the second comic series by Mark Millar to be adapted for film (with the very loosely Wanted adaptation being the first) and Matthew Vaughn (Stardust, Layer Cake) directs it with real flair. Vaughn’s film begins as a very dark comedy that plausibly explores the absurdity of a teenager calling himself Kick-Ass trying to become a superhero. As Dave gets in way over his head with a powerful organised crime syndicate and a father-daughter vigilante team, the original premise of the film is somewhat sidelined to give way to a highly inventive and incredibly thrilling action film.

The father-daughter vigilante team are the far more experienced and ruthless Damon Macready (Nicolas Cage) and his 11-year-old daughter Mindy Macready (Chloë Grace Moretz who was Tom’s little sister in (500) Days of Summer). One of the big delights in Kick-Ass is Nicolas Cage’s hilarious performance as the nerdy and obsessive Damon who inexplicably talks like Adam West in the 1960s Batman TV series. With a few notable exceptions, such as Leaving Las Vegas, Cage has always been best when playing oddball character parts and in Kick-Ass he reminds us why he was once such a loved actor. 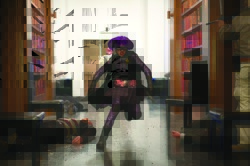 Then there is Moretz as Mindy who adopts the identity of Hit-Girl when in action. Moretz is so amazing as an action performer that she evokes Chow Yun-Fat when he was at his peak in the classic Hong Kong heroic bloodshed films. Like Chow, Moretz makes the act of firing and reloading gun look effortlessly cool and graceful, making the extended climatic shootout in Kick-Ass the most exciting moment of excessive gunplay since the hotel lobby scene in The Matrix.

Make no mistake; Kick-Ass is a violent, occasionally sadistic and frequently amoral film. It is also breathtakingly fun and wonderfully transgressive. It doesn’t quite stick to its main conceit but once Moretz is in action you just won’t care.