The writer/director Richard Kelly is shaping up to go down in film history as one of those directors who began his feature film career magnificently but never got close to repeating the same magic again. In Kelly’s case his magnificent début was the 2001 science-fiction teen film Donnie Darko. Since then Kelly released a bland Director’s Cut of Donnie Darko and then in 2006 he made Southland Tales, which was an unmitigated disaster. His third film, The Box, fits somewhere in between as a major improvement on Southland Tales but not even close to the excellent original version of Donnie Darko. Based on a 1970 short story by What Dreams May Come and I Am Legend author Richard Matheson, The Box explores ethical questions about self-interest and the role that distance plays in our ability to sympathise with other people.

In The Box a financially struggling family in 1976 are given a strange box and told they have 24 hour hours to decide if they will press the button on the box that will result in them getting 1 million dollars and the death of somebody completely unknown to them. Despite the intriguing scenario that had the potential to function as a parable for how so many of us complicity live a lifestyle that we know is having an adverse effect on people in other parts of the world, The Box never quite delivers. 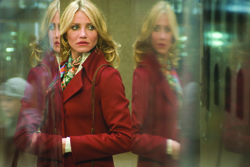 Kelly’s film is a slow and moody piece that tries a little bit too hard to generate a sense of mystery with creepy psuedo-atmospheric music, repeated references to Jean-Paul Sartre’s existential play No Exit and the constant appearances of random weird people who spontaneously get blood noses. The couple with the moral dilemma are played rather flatly by James Marsden and Cameron Diaz, who sports a bad prosthetic deformed foot.  On the other hand, Frank Langella is suitably unsettling as the man who brings them the box and the CGI effects used to create the effect of him missing half his face are very impressive.

Despite the laboured beginning, the middle section of The Box does have inventive moments that recall the mystery of Donnie Darko but then the film slumps again in the over-explained final act. The Box tries to tackle the big themes of human nature and our place in the universe but it never quite manages to rise to the occasion. It is a film that wants to be profound but it ends up feeling more like a lesser episode of The X Files.