Seinfeld co-creator and Curb Your Enthusiasm creator and actor Larry David plays Boris Yelnikoff, a self-proclaimed genius who was almost nominated for a Nobel Prize. After a divorce and a suicide attempt Boris now lives alone in a dingy New York apartment. Boris is cynical, nihilistic, neurotic and an intellectual and cultural snob. His constant sarcastic tirades and insults would be truly unpleasant if they weren’t so funny. Boris is basically a more misanthropic version of the persona that typically inhabits most of Woody Allen’s films, often played by Allen himself. However, as recognisable as this character is to fans of Allen, Larry David has made Boris very much his own.

Early in Whatever Works a naive, sweet, uneducated and attractive young woman named Melody (Evan Rachel Wood from The Wrestler) arrives in New York having run away from her Deep South family. Hungry and with nowhere to go Melody by chance bumps into Boris and against his better judgement he allows her to stay with him. They become the classic odd couple and form a close bond despite clashing over everything. 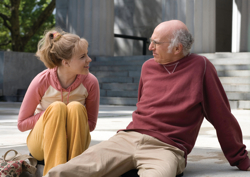 Depending on how you feel about Woody Allen you will describe Whatever Works as either a retread of well-worn ground or a welcome return to the type of relationship comedy/dramas that he was making in the late 1970s. The fact that Allen originally wrote the script in the 1970s is actually not all that surprising considering how similar it is in tone to some of his earlier films. The cinematography is a lot warmer, softer and more fluid than it has been in many of his recent films and Allen makes beautiful use of strategic close-ups on the faces of the characters during key moments of human connection.

Most significantly is that after a considerable break Allen has returned to making films in New York; a city that he clearly loves and it does bring out the best in him. In Whatever Works New York functions as a sort of place of liberation where people who come to it are transformed, cast aside their prejudices and discover happiness. There are a lot of jokes at the expense of conservatives, the religious right and Southerners in general and Allen clearly relishes being able to really stick it to them. At the start of Whatever Works Boris addresses the audience directly and warns us that this is not the feel good movie of the year. Don’t let the miserable old bastard fool you as Whatever Works comes extremely close to feel good territory and certainly finishes on an oddly touching message about embracing any opportunities for happiness even if they are only fleeting.