The Italian director Sergio Leone, best known for ‘Spaghetti Westerns’ such as A Fistful of Dollars and Once Upon a Time in the West, has inspired many directors to pay homage to his highly kinetic style of filmmaking. Some of these directors have included Quentin Tarantino, Robert Rodriguez, Sam Raimi, Shane Meadows and Tsui Hark. Now the South Korean director Kim Ji-woon (A Bittersweet Life, A Tale of Two Sisters) has paid tribute with The Good, the Bad, the Weird, a film that obviously derives it title from Leone’s The Good, the Bad and the Ugly. Kim’s film is one of the most successful films to capture the spirit of Leone’s cinema and it is also one of the most enjoyable.

As with The Good, the Bad and the Ugly, in The Good, the Bad, the Weird there are three protagonists all after the same goal – buried treasure hidden in the Manchurian desert. Set in the 1930s shortly after Manchuria was occupied by Japan, the trio not only have to contend with each other and their respective cohorts but there are also a gang of bandits and the Imperial Japanese Army who are after the treasure too. 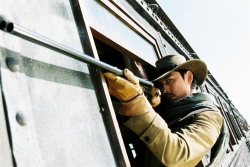 From the exhilarating train hijacking at the start of the film right through to the all out horse/motorbike/car chase across the desert before the final showdown, The Good, the Bad, the Weird is a cinematic rush of adrenalin. Kim beautifully replicates Leone’s aesthetics of contrasting extreme close-ups with wide shots, depicting violence in a way that is both brutal and poetic, and establishing an overall tone that is frequently funny and self-conscious without ever being camp. As well as taking inspiration from various Leone films, Kim has also borrowed a few ideas here and there from Mad Max 2 and to a lesser degree Raiders of the Lost Arc. While contemporary action films are increasingly becoming a blur of quick edits, Kim has the confidence and logistical skills to set up complex action sequences and then film them in continuous shots. The Good, the Bad, the Weird is a very technical and modern film but it is also a return to the old-school discipline of simply presenting movement on screen in the most exciting way possible.