Not that long after Beautiful Kate has hit the Australian cinemas, comes another Australian film featuring a Prodigal Son. This time the Prodigal Son is Boots, played by Kenny’s Shane Jacobson, who has returned to the family farm in Warrnambool for his mother’s funeral. His estranged, grieving father is Charlie, played by Crocodile Dundee himself, Paul Hogan. On a whim Boots decides that an impromptu road trip to go fishing in Cape York with Charlie is all that he needs to do to shake his old man out of the doldrums and repair the rift between them. Cue male-bonding road trip film.

Charlie & Boots is the second feature by writer/director Dean Murphy and writer Stewart Faichney. It’s an improvement on their average yet popular previous film Strange Bedfellows but it is still overall a reasonably bland affair. Charlie & Boots is a decent portrayal of the way Australian men, particularly fathers and sons, relate to each other but there is not much substance to the dynamic between Boots and his dad. While Shane Jacobson gives a good performance, Paul Hogan is just simply too limited as an actor to lend any real credibility to the emotions on display. Charlie & Boots does nicely capture the spirit of an Australian road trip and it is a very picturesque film. However, the very idealist portrayal of regional middle Australia gets as tiresome as the heavy handed use of music where sad scenes are dominated by a mournful piano and funny scenes are accompanied by a banjo. 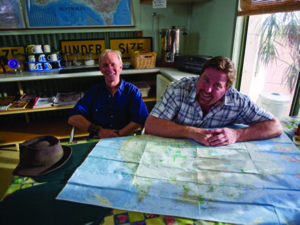 There’s nothing to really dislike about Charlie & Boots but there’s not much to embrace either. The humour is inoffensive and mostly well meaning but it generates the occasional chuckle rather than laughter. A lack of strong script editing also means that every time the film wins you over, it undercuts itself with a dud moment that should have been left on the cutting room floor.

Charlie & Boots is a harmless and pleasantly Aussie film. It’s enjoyable on a very simple level but instantly forgotten the moment the post credits gag (which provides one of the film’s biggest chuckles) is over.