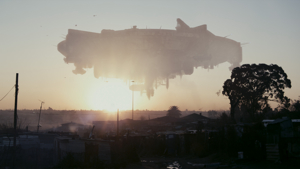 For over twenty years an alien spaceship has been hovering over the South African city Johannesburg. Its stranded alien occupants have since been living in slum conditions in a militarised camp know as District 9. Tensions between the human and alien population are running thin so the private company Multi-National United (MNU), who have a commercial interest in harnessing the alien technology for weaponry, are sent in to relocate the aliens. The mass eviction campaign is lead by Wikus Van De Merwe (Sharlto Copley in his acting début), a petty bureaucrat who, like most humans, refers to the aliens derogatively as ‘prawns’. However, when Wikus becomes exposed to a black fluid he finds in one of the slum shacks he finds himself undergoing a radical genetic transformation. Now hunted by the ruthless MNU military division and the exploitive slum crime syndicates, Wikus has nowhere else to hide but within District 9. 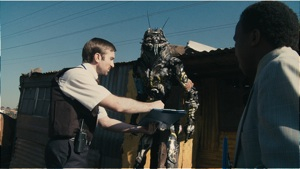 Produced by Peter Jackson (The Lord of the Rings) District 9 is the feature writing and directing début of South African visual effects artist Neill Blomkamp. The genesis of District 9 is contained within Blomkamp’s impressive 2005 short film Alive in Joburg, where he first introduced the idea of using an alien and human encounter to explore issues of discrimination. Just as films about misunderstood benevolent aliens in the 1950s (The Day the Earth Stood Still, It Came from Outer Space) were calling for an end to the Cold War us-and-them mentality, District 9 is likewise making a strong statement about the damage that can be done when refugees are treated with suspicion before being given any compassion. It is a fascinating contrast to the politics of alien invasion films such as Independence Day and War of the Worlds (original and remake). District 9 is an incredibly effective parable about human rights abuses against refugees, while also functioning as a thrilling science-fiction action film.

District 9 is very fast paced and has a constant feeling of immediacy. Blomkamp uses extensive use of the faux documentary new-media style of filmmaking where mock footage from security tapes and news reports are seamlessly integrated into the action. The world of the film is further fleshed out due to the amazing visual effects used to so vividly create the aliens, their spaceship and other pieces of hardware. This is a rare case in modern cinema where the effects actually look real rather than something designed by committee on a computer during postproduction. 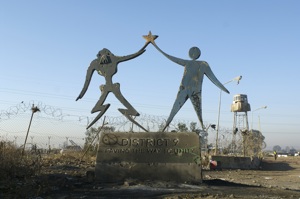 The final key to the why District 9 works so effectively is that it has been written intelligently. As the lead character, Wikus is an unlikely hero as he is selfish, cowardly and prejudiced. However, he is nevertheless identifiable and not beyond redemption. The alien characters are also rendered as fully fleshed out characters and Blomkamp generates an enormous amount of sympathy for them. There is nothing clean-cut or contrived in District 9 and it doesn’t even resolve traditionally. The lack of complete closure naturally leaves open the potential for a sequel but it also feels true in the sense of that the racial conflict at the heart of the film is not something that can be neatly resolved. District 9 is the most original, innovative and entertaining science-fiction film in years and contains the best mix of politics and spectacle since Starship Troopers.