NOTE: This review discusses the English language version of The Fox & the Child with narration by Kate Winslet. 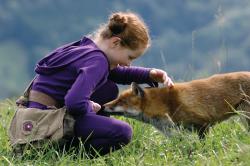 Long before making the popular 2005 drama/nature documentary March of the Penguins (La marche de l’empereur), writer/director Luc Jacquet had conceived the story that would form the basis of The Fox & the Child (Le renard et l’enfant) out of events from his own childhood. While growing up in the Ain region of France, Jacquet formed a bond with a wild fox and that relationship is replicated in The Fox & the Child when a young girl (Bertille Noël-Bruneau) discovers a fox near her home, slowly gains the animal’s trust and eventually forms a unique friendship with it.

As he demonstrated in March of the Penguins, Jacquet knows how to make animals and nature look stunning on camera but he lacks the ability to tell an involving story (at least in the English versions). The Fox & the Child is sweet and cute but it becomes tiresome. Nevertheless, the film is beautiful to look at and the cinematography does justice to this beautiful part of France, which is near the Alps. The English dubbing is annoying and Kate Winslet’s narration is unnecessary although it probably does help the younger audience members maintain concentration, as the film is slow to develop.

As visually delightful as The Fox & the Child is, the mind does wander during its admittedly short running time. You may enjoy imagining what sort of film The Fox & the Child would have been if Werner Herzog did the narration instead of Kate Winslet. Instead of lines like, “My heart was beating so fast! He was so cute!” there would be musings such as, “I now understand that nature is fundamentally about violence, chaos and murder!”

The bottom line is that The Fox & the Child is a nice film, appealing to look at and contains a nice message about the dangers of humans interfering with nature. Beyond that it lacks substance but the fox is suitably cute so that’s the main thing.