The set-up of The Hangover is simple enough. A guy is getting married so he takes his two best friends and his soon-to-be brother-in-law to Las Vegas for one last night of partying. The four guys are variations of the types of characters we’ve seen in these types of “guys being guys” films before, from American Graffitti to Animal House to American Pie. There is Phil (Bradley Cooper, He’s Just Not That Into You) the wise-cracking likeable bad boy, Stu (Ed Helms, the US version of The Office) the repressed nerdy one, Alan (Zach Galifianakis, What Happens in Vegas) the offbeat weird one, and there is the groom Doug (Justin Bartha, the National Treasure films), the straight and kind of boring one who fortunately does not feature too much overall. The guys start their night of celebrations with a rooftop toast and the next thing they know 12 hours have passed and they’ve lost their memories. Their apartment is trashed, there is a tiger in the bathroom, there is a baby in their room, one of them has lost a tooth, one has a hospital wristband, they have acquired a police car and worse yet, the groom has vanished. Then things start to become really weird.

The Hangover does feel strongly connected to previous male bonding gone awry films by director Todd Phillips. In Road Trip (2000) the characters were college students, in Old School (2003) they were adult men-children who still indulged in college life and now in The Hangover they are reasonably ‘mature’ adults with real jobs and real relationships. Like his characters, Phillips seems to have matured as a director too as while Road Trip was terrible and Old School was bizarrely overrated, The Hangover is a superbly well-crafted film. Part of this craftsmanship is creating characters who don’t talk like self conscious Hollywood actors but who actually interact with each other in a way that feels natural. It also helps that although the actors may be recognisable from television work and smaller parts in other films, they are not stars and don’t carry the baggage of having a recognisable shtick. The film also develops in a way that although over-the-top feels grounded in a recognisable reality. 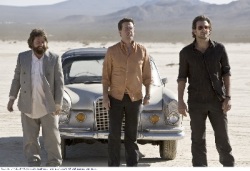 The depiction of Las Vegas as a surreal, transgressive and otherworldly place almost rivals Terry Gilliam’s excesses in his 1998 film adaptation of Fear and Loathing in Las Vegas. In The Hangover Las Vegas is both the source of forbidden pleasures and temptations but also a living hell where our characters are subject to an increasing amount of chaos, depravity and violence for their sins. Phillips almost gives Las Vegas an apocalyptic look at times and the theme that it somehow exists outside of the conventions of normal society and civilisation is very strong. Las Vegas takes on a mythical function as some kind of carnival/purgatory where the normal rules don’t apply but the temptation to indulge in the freedom results in you paying for those indulgences several times over.

The Hangover is a tribute to the Epic Night; the big cathartic Bender; the grand act of Letting Off Some Serious Steam. Cooper, Helms and Galifianakis are a wonderfully likeable trio and because they are not macho or arrogant, their male bonding is actually entertaining rather than obnoxious. While the domination of the filthy-yet-with-a-heart Judd Apatow brand of humour in film comedy has been largely welcome, there is something highly reassuring about the fact that a broad, grungy and even primal comedy like this can still hold its own.