Summer Hours (L’Heure d’été) originally began as an initiative by Paris’s Musée d’Orsay. It was to be a short film that would have been part of a project examining the relationship between art and cinema. The full project never happened but French director Olivier Assayas (Clean, Irma Vep) went ahead with the original idea and made Summer Hours as a feature. The resulting film is gentle family drama that uses the dynamic between three siblings to explore the relationship between people and art. Summer Hours begins with the 75th birthday celebrations for Hélène (played by prolific French actor Edith Scob), the niece of a famous painter. Hélène’s country house is filled with her uncle’s extraordinary 19th century art collection, which she wants her three 40-something children to sell once she dies. Later when Hélène does die the siblings need to decide what to do. Frédéric (Charles Berling who also appear in Assayas’s demonlover and Les destinées sentimentales) wants to preserve his mother’s home and art collection but his brother Jérémie (Jérémie Renier from In Bruges and L’Enfant) and sister Adrienne (Juliette Binoche) now live abroad and can’t see any reason not to sell everything.

Interestingly the only other feature that resulted from the Musée d’Orsay’s abandoned project was Flight of the Red Balloon (Le voyage du ballon rouge) by Taiwanese director Hou Hsiao-Hsien, who is an important influence on Assayas. Not only do both films star Juliette Binoche but they also share a gentle realist approach, which focuses on everyday interactions. Summer Hours is more narrative driven than Flight of the Red Balloon and is also a more intimate and accessible film than many of Assayas’s other works. Summer Hours focuses on the way Frédéric, Jérémie and Adrienne cope with their mother’s death and resolve their conflicting wishes about what to do with her art collection. It is a film about the relationships between siblings and how people cope with everyday life after loosing a family member. 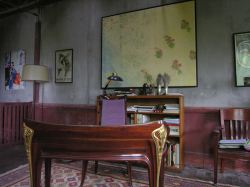 Summer Hours is also about the relationship between people, art and the past. Through the interactions of the three siblings and their families, Assayas subtly explores ideas surrounding the place that art has in society. There are also some moments of gentle humour about evaluating the differences between the marketplace value of an object and its sentimental value. Assayas never gets too academic but there are moments where the audience are invited to compare the difference between viewing an item in somebody’s home and viewing it in a museum. If there is one message that Assayas is trying to send out then it is the idea that while preserving art and antiques is important, the younger generations should never feel burdened by having to preserve the past. Summer Hours beautifully combines Assayas unpredictable and intellectual approach to filmmaking with a very human family drama.