Brian Clough was a larger than life English football personality whose successes have resulted in him being considered one of the greatest ever football managers. Loosely adapted from the novel The Damned Utd by David Pearce (who also wrote the novels that the Red Riding trilogy were based on), this biographic film focuses on Clough’s first major success managing Derby County from 1967 to 1973 and then his ill-fated stint managing Leeds United in 1974. Adapted for the screen by Peter Morgan (The Queen, The Last King of Scotland, Frost/Nixon), The Damned United depicts Clough’s long running rivalry with Don Revie, the man who successfully managed Leeds United from 1961 to 1974, to be a leading motivation behind why he managed both teams in the extraverted way that he did.

You don’t have to be a football fan or even a big sports fan to enjoy The Damned United. The grand narrative that is Clough’s rise and fall is compelling regardless of the context and his story even takes on elements of classical Greek tragedy, especially considering it is his incredible hubris that brings about his own undoing. There is also a very sweet friendship at the heart of The Damned United and the relationship between Clough and his assistant Peter Taylor is classic bromance material. 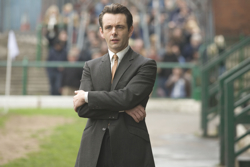 Clough is played by Michael Sheen and after his incredible work in The Queen and Frost/Nixon, Sheen has yet again distinguished himself as an actor who is highly talented in portraying real life personalities. Much of the pleasure to be had in The Damned United is watching Sheen channel Clough’s extraordinary charm, confidence and arrogance. Timothy Spall provides a wonderful contrast to Clough’s exuberance as Peter Taylor and the overall excellent cast includes Colm Meaney as Don Revie and Jim Broadbent as Derby Chairman Sam Longson, whom Clough had several run-ins with.

The Damned United is directed by Tom Hooper who aside from directing Red Dust (2004) has worked in television, which is not a huge surprise given that there is nothing particularly cinematic about The Damned United. However, The Damned United is acted extremely well and contains a compelling story that will keep you interested right up to the end. This is a good drama about a man whose strange mix of good intentions, petty rivalry and obnoxious behaviour makes for fascinating viewing.